Refugees often lack documentation. This can have severe consequences for refugee students and for refugees who are potential students.

Colleges and universities require proof of eligibility and of prior qualifications. Speaking at the Going Global conference in London in June, Helena Barroco, coordinator for the Global Platform for Syrian Students, reported that places made available for refugee students in US universities were unfilled because applicants could not provide required documentation.

This problem was emphasized again in September by Marybeth Gruenewald of Educational Credential Evaluators, a non-profit organisation based in Milwaukee. “Very, very few” universities, she said, had considered how to authenticate refugees’ documentation, or had procedures in place to deal with this problem.

Given the progress that has been made with digital verification, individual identity confirmation and secure, on-line storage, this is an unnecessary problem to have. Despite concerns with online fraud and virtual break-ins, a range of systems from airline bookings and passport controls to on-line banking and taxation systems depend on caches of digital records that are secure and can be accessed on-line. There is no technical or administrative reason why universities should continue to depend on certified paper copies of qualifications and academic transcripts.

James King, of the Institute of International Education, has spent a good deal of time in direct discussions with refugee students now in Turkey, Lebanon and Jordan. Their lack of documentation is straightforward and brutal.

Students fleeing Aleppo in the face of imminent attack have no opportunity to find the Registrar’s office at their university to get copies of their transcript; in all likelihood the university is already closed and the Registrar long gone. How can such student be expected to meet a British or American university’s traditional application requirements from a refugee camp in a foreign country? 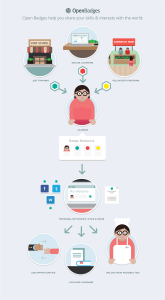 There are plenty of prototype systems of electronic verification that could be used. Mozilla’s Open Badges, for example, verify learning by providing a person with an online Badge Backpack which can contain accreditation from any participating organization.

Alternatively, Britain’s Higher Education Achievement Record, now widely used, is hosted online by a participating university for its own students, providing an on-line transcript in a secure, standard format that can be used in job applications, in applying for postgraduate courses, or for any other purpose that its owner wants.

More people are currently displaced by violence and on-going conflict than since World War 2. And, given that mass enrolment in Higher Education is a comparatively recent trend, there are more refugee students than ever before. Apart from individual needs and rights, today’s refugee students will be essential for rebuilding countries once peace is restored, or for putting in place solutions to some of the most intractable problems, such as the continuing occupation of Palestinian territories and the continuing consequences of the Rwandan civil war. Consequently, dealing with the administrative problems that are preventing well-qualified refugee students from taking up university places in safe havens is an urgent priority that will bring valuable returns.

There is a clear role here for consortia of universities and national university organizations such as Universities UK or the Universities and Colleges Admissions Service (UCAS). For example, by building on the investment in HEAR – which provides individual British universities with the facilities for secure on-line student transcripts – such organizations could host a central clearing service for on-line student documentation that is aligned with the work of international refugee support agencies.

In a presentation to a United Nations forum in New York, Mark Zuckerberg recently announced plans to work with the UN High Commissioner for Refugees to bring the Internet to refugee camps: “Connectivity will help refugees better access support from the aid community and maintain links to family and loved ones.” Connectivity will also provide for essential administrative services, such as those for potential College students caught up in today’s maelstrom of displacement and dispossession.