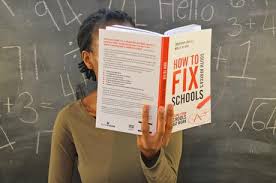 Statistics reveal everything and nothing about education.

For South African schooling, the numbers reveal that, for a country that spends a comparatively high proportion of its GDP on education, we do consistently badly.  Despite innumerable interventions, key indicators, such as achievement in Mathematics, put us at the bottom of every table.  And yet these numbers tell us nothing about what happens in a classroom; little about why some schools succeed and others do not. Its not at all clear why some schools fail to meet expectations despite having all the right numbers for success, while others defy all statistical expectations, year after year.

As in other key public sectors, such as health and housing, it is increasingly accepted that the statistics must be matched with the richness of qualitative studies if they are to be properly understood.  Education professionals need the skills of the Humanities if they are to really understand what works, and why.  They need to see what emerges when the complex weave of day-by-day practice is unpicked: intersections of complex and competing priorities in local communities; dreams, fears and ambitions;  the balance between assumption and aspiration.

Here, film is a powerful medium. One of the most talented filmmakers working in this area is Molly Blank, whose 2007 documentary Testing Hope – Grade 12 in the New South Africa was, and still is, a revelation that should be compulsory preparation for anyone working in a university admissions system.

Testing Hope follows the lives of four young people in Nyanga, in the context of one school.  Building on this project, and working with Jonathan Jansen, Molly has asked a different question on a broader canvas:  what makes some schools work?

We decided to take a unique approach by using film to tell the stories of passion, determination and leadership that are taking place in South African schools. These films tell the stories of schools that shift the paradigm and defy our expectations. They are stories of determined and resilient young people who arrive at school at 6 am for mandatory study, stories of teachers who have concrete lesson plans, and committed principals who lead with a philosophy and vision that is deeply felt throughout the school.

Why do these schools do well when every other school in the same environment under-performs? In locating the factors that make these schools not only survive but also excel, we thought we might find the seeds of hope for renewal and change in all our disadvantaged schools.

The result of this project is a handbook, intended as a guide for schools that want to learn from exemplars of success, and a suite on nineteen short documentaries. All the films are freely available, and speak for themselves.  They are listed, with their links,  at the end of this post….

The handbook that accompanies this set of films sets out the aims and methods of the project along with a set of reflections on the experience of visiting each school. Here, the observations by the school principals are particularly powerful, showing both the determination to succeed and the wall of difficulties that has to be overcome to make success a possibility.  Here is Nelson Ma’Afrika, the Principal of Masiphumelele High School in the Western Cape:

Between 2004 and 2006, the matric pass rate was between 34 and 28%. In 2007, we had an increase from 28 to 58%. Then the ball kept rolling. We made a huge jump to 81% and then to 85%. We’re striving to convert this school into an exceptional institution. A few years back, you wouldn’t have so many people having passed matric. Even those who were passing would go and work in the local industry like factories, supermarkets and restaurants. Now our intention is to produce as many learners who go for tertiary education and who will, at the end of the day, uplift the standard of living at Masiphumelele.

And here is Edward Gabada, the Principal of Mpondombini Secondary School in the Eastern Cape, a school that has also beaten the odds against success:

Sometimes you have a vision, but you feel like you do not know whether you are getting the support. You cannot do everything by yourself. There are grade 11s, up to now this year, they don’t have textbooks. Textbooks were delivered to other high schools, but this one, no textbooks. What do you expect then, in your visions, when you don’t get support? What else can I do? Nothing. I do my part, but somebody is not doing her part or his part. Our learners are losing a lot. But at the end of the year people will be expecting Mpondombini to perform.

Schools that Work concludes with a set of ten strategies for success that have emerged from these close, qualitative studies.  They include the importance of clear and consistent routines for teaching and learning, leadership and discipline, engagement with the school’s community, and that students are challenged with the highest expectations and offered the vision of a life beyond the school.  The key point here is that these strategies have been applied by gifted principals and teachers, despite their working in some of the most difficult circumstances imaginable.  It’s people that matter; what’s in their heads, and their hearts.  Mbongeni Mtshali, Principal of Velabahleke Secondary School in KwaZulu-Natal:

There is no resource that beats a teacher. In a teacher there is everything. A teacher can even improvise where the resource is not available. They will do anything. They move mountains. They are also highly inspired to see their kids succeed in life. Yes, we do have some limited resources. But more than anything else, the resource that we can rely on is a human resource – my teachers.

The Schools that Work project, which was carried out under the auspices of the University of the Free State, is matched by similar qualitative studies elsewhere. One of these was focused on a large set of schools in Chicago, carried out over a fifteen year period.  As in South Africa, the Chicago study was inspired by examples of schools that beat the odds.  In the early 1990s, Alexander Elementary School and Hancock Elementary School,  just two miles apart, served low income families and had the worst levels of achievement in mathematics and reading in the city.  Over the following years, one school beat the odds while the second remained unchanged. Why?

To address this question, the Consortium on Chicago School Research looked in close detail at the internal workings and external community relations of a large set of schools. Because, in this study, there were the resources for including a large number of schools over a long period of time, it was feasible to look at both qualitative and quantitative indicators.  One example shows what this looks like – the probability of a school improving where the qualitative study has shown that there are strong forms of support for reading improvement. 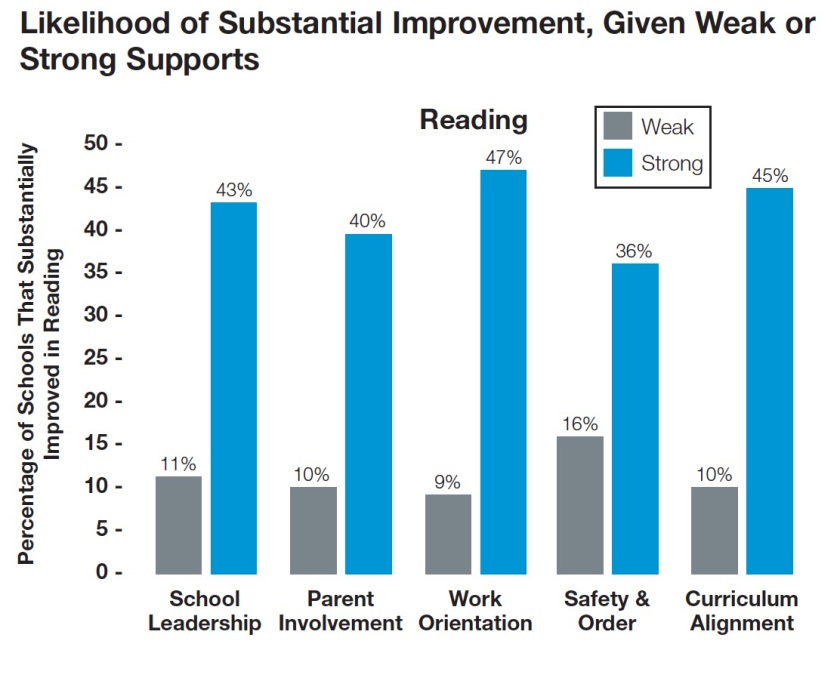 As with the South African Schools that Work project, the Chicago study identified a common set of key strategies that account for success in beating the odds.  These are a clear and coherent system for learning and teaching, good and well qualified teachers, strong ties between the school, parents and the community, a school climate that is strongly focused on students, and strong leadership.  These key pillars of success are very similar to the strategies that Molly Blank and Jonathan Jansen derived from their intense engagement with the set of successful South African schools.

Whether in Chicago, across South Africa or in any other place where the drive for education encounters obstructions that can derail any planning for improvement, the rich and complex detail of local circumstances is key part of finding viable solutions. Molly Blank’s rich documentary resources are both a key contribution, and a fine example of why the critical arts and humanities are so important.

One thought on “Schools that Work”