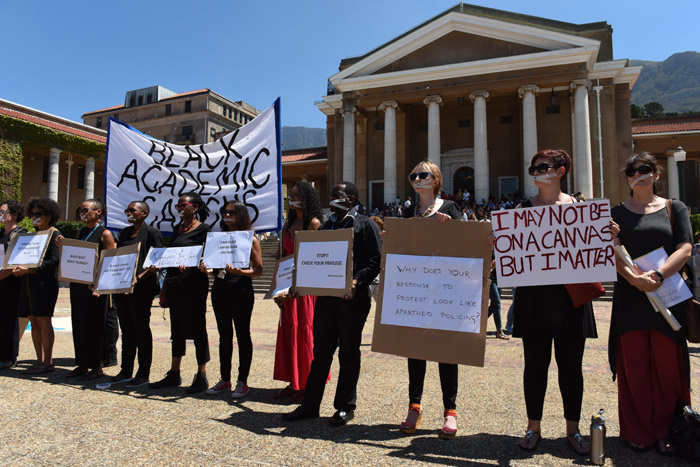 There is an emerging consensus, across of fluid groups of students and academics in South Africa, that the form and content of the curriculum need radical reform.  While this critique has implications for all fields of study, its leading edge is the Arts and Humanities.  This is a debate about what counts as legitimate knowledge, what is taught and what is excluded, and how the university connects with the needs and aspirations of today’s students.

In response, the Journal of Arts and Humanities in Higher Education has brought out a special edition focusing on South Africa. As John Higgins and Peter Vale put it in their introduction: “what we are witnessing is a living on of the past, a startled recognition that the past is not even past”. While the papers in this collection respond to this specific “state of urgency” they are also indexed to the wider critique of the neo-liberal university and the future of the Humanities more generally.

Here, there is a creative twist. Despair for the future of the Humanities across Anglophone networks tends to slip into a nostalgia for a golden age of freedom from meddling bureaucrats. But this is not a door that left-leaning South African scholars can easily open; theirs is a dark past of colonial administrations and apartheid segregation.  The result is a forward focus of possibilities and creative contradictions.

This scope of the possible is framed by Achille Mbembe in this collection.  His dissection of the drive for the decolonization of the South African university matches his parallel critique of the neo-liberal university in general:

Universities today are large systems of authoritative control , standardization, gradation, accountancy, classification, credits and penalties. We need to decolonize the systems of access and management insofar as they have turned higher education into a marketable product, rated, bought and sold by standard units, measured, counted and reduced to staple equivalence by impersonal, mechanical tests and therefore readily subject to statistical consistency, with numerical standards and units. We have to decolonize this because it is deterring students and teachers from a free pursuit of knowledge. It is substituting this goal of free pursuit of knowledge for another, the pursuit of credits. It is replacing scientific capacity and addiction to study and inquiry by salesman-like proficiency.

This could be a paragraph by Stefan Collini or Howard Hotson, writing in the London Review of Books about past freedoms that have been swept away by marketization.  But there is nothing to be salvaged from South Africa’s past.  The rhetoric of polarisation has crystalized history as the imperial gaze of Cecil John Rhodes, whose statue was toppled from its commanding position on the University of Cape Town’s campus in last year’s protests. Mbembe’s eye is firmly on the future, on the possibilities in “new diasporic intellectual networks” that could replace “the endless production of theories that are based on European traditions” with new ways of thinking.

Other essays in the Arts and Humanities special edition are assessments of the state of the disciplines:  English, Economics, African Languages, Politics, International Relations.  Their common thread is the acknowledgement that the selection and interpretation of things that matter – of what we canonise as “knowledge” – is intimately connected with who is teaching, who is learning and what is going on outside the university.

Unsurprisingly, English is at the forefront of this re-consideration, as it has been for many years:  the language of the coloniser and also, in many forms, the language of the colonized; the place of the canon in the curriculum; which authors should be included;  what counts as literature.   Here is Victoria Collis-Buthelezi:  “what then are those of us who identify as literary and cultural scholars to do today, when the very enterprise of the modern university is in crisis and our role in it is not only unclear, but becoming increasingly suspect?”. She continues by mapping out what could be called a political economy of her field of study:

Such reforms would be a necessary condition in Mbembe’s “pluriversity” of the future.  His essay takes the fight beyond the constraints of any national borders, rejecting the “Africanization” arguments that he sees as compromised by the corruption of the post-colonial state. Mbembe sees the new enemy as the new global elites, obsessed with rankings, differentiation and exclusion. The opportunities for opposing these new knowledge empires lie with a “critical cosmopolitan pluriversalism”:

We will foster a process of decolonization of our universities if we manage to build new diasporic intellectual networks and if we take seriously these new spaces of transnational engagement and harness the floating resources freed by the process of globalized talent mobility.  We no longer live in an age of one-way flows of qualified human resources and capital. We therefore need to reconfigure our understanding of our own situatedness in Africa and the world and stop thinking in South-African-centric terms.

The positions brought together in Arts and Humanities in Higher Education are an early stage in an evolving and creative debate, grounded in contradictions. The rejection of “epistemic coloniality”, of the Enlightenment settlement that is the foundation of the Western university, is also a rejection of the shared set of academic concepts and conventions that enables critiques to be written and published.  And Collis-Buthelezi describes the ways in which the discomforts of history can return once the conditions for engagement have been changed:

Sitting below Rhodes and his plinth my students and I had to read Soga’s veneration of Rhodes’s ‘‘equal rights for all civilized men South of the Zambezi.’’ I cannot stress how difficult it was for most of my students to sit in that present below the feces marked Rhodes, amidst their peers debating the meaning of the hunk of rock, and read the founder of one of the native press associations revering Rhodes. It was a palpably uncomfortable yet electric class. What became clear was that the future to which Soga looked was not the present we now inhabit nor was it a future we desire.

This is the creativity in contradictions; the possibilities in new terms of debate when the nostalgia for a lost golden age is revealed as a mirage.

Victoria Collis-Buthelezi: ‘‘‘The fire below’’: Towards a new study of literatures and cultures (in English?) A letter from a literary scholar in a South African university in transition’.  Arts & Humanities in Higher Education 2016, Vol. 15(1) 67–78.