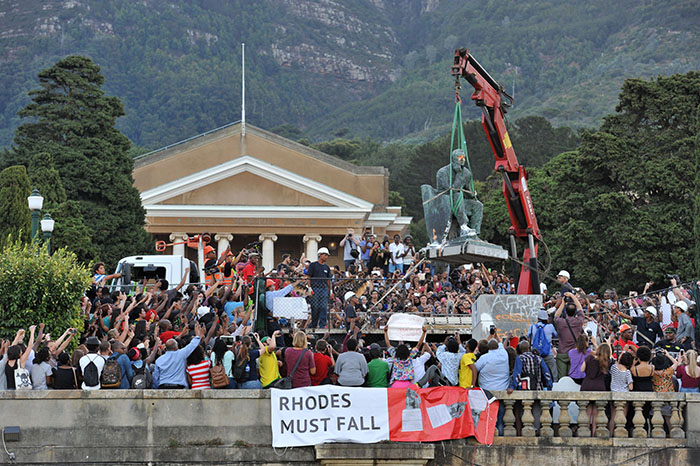 Cecil John Rhodes was controversial in life and death. Over the past weeks the future of his statue at the University of Cape Town has split opinion in a rush of words that has become countrywide. On 8 April, UCT’s Council agreed to remove the statue in a victory for the Rhodes Must Fall student movement.

The issues behind the protests are more substantial than the commemoration of a long-dead imperial dreamer. They comprise three intertwined sets of challenges: the university’s admissions policy; the student experience; and the demographic profile of the academic staff.

UCT is South Africa’s most sought after university. Crafting an equitable admissions policy is complicated by the toxic mix of marked economic inequality and the legacies of racial segregation, and by the constitutional requirement that universities address the continuing consequences of apartheid. As a result, UCT uses a mix of US-style affirmative action and what would be understood in Britain as contextual admissions.

This makes continuing dissent inevitable. The Rhodes Must Fall student movement’s demands are simple: “adopt an admissions policy that explicitly uses race as a proxy for disadvantage, prioritising black applicants”. But for others, also demanding radical change but grounded in the long and principled tradition of non-racism, any use of race as a criterion is anathema. White middle class families see their children as unfairly disadvantaged. Many middle class black students, born into a new country and beneficiaries of the best schools, resent the implication that they need a leg up to get in. And for a large number of aspirant black students from poor families and impoverished communities, UCT is still as inaccessible to them as Rhodes intended it should be.

The student experience combines the formal curriculum, the extra-curricular opportunities of a traditional campus, and the attitudes and expectations that people have of one another; together, the institution’s culture. Given that South Africa’s higher education system was built on a double grid of discrimination by race and then again by language and ethnic identity, this is inevitably a difficult area. As Vice-Chancellor Max Price has acknowledged, there is a pressing need to build an institutional culture of inclusiveness, where all feel welcome.

The alienation that students can feel is expressed by fourth-year student Mbali Matandela:

The lectures don’t represent your history or your narrative at all. You don’t see yourself on the campus monuments, or the naming of the buildings. You then turn to your books which don’t address you. Students learn from lecturers, and lecturers learn from students, and you share an experience. When the experience is not there, you’re almost disconnected from knowledge itself.

The demographic profile of the academic staff is inseparable from the student experience. While white South Africans are now less than 10% of the population as a whole, a substantial majority of UCT’s more senior academic staff are white and those holding professorships are overwhelmingly male. Experience elsewhere, and particularly in the US, has shown that changing a university’s demographics is a long journey that must start with the recruitment of strong cohorts of doctoral degree students and continue with close attention to selection and promotion processes. The problem now, that has sharpened around the controversy of Rhodes’ statue, is that more than twenty years have passed since the initial commitments of a new democracy. It is difficult to defend the argument that a further two decades will be needed before South Africa’s leading university will have a profile that reflects and enhances the abilities and expertise of its people as a whole.

Taken together, UCT’s contested admissions policy, fractured institutional culture and low levels of recruitment of black academic staff have come to stand for the slow pace of transformation in South African higher education more generally, and for the growing alienation of those coming of age. Sociologist and public intellectual Xolela Mangcu sees a clear danger of heightened conflict ahead:

If people can continue to behave in hurtful ways without knowing it, then surely a counter-reaction is inevitable? Between us and that outcome stand the students of UCT. They are our best antidote to racist psychosis. They are the miner’s canary that is foretelling us of the perils of racial war. Heed them, and heed them now.

Statues everywhere can be complicated. They freeze a likeness of a person at a moment when it is assumed that their legacy will be celebrated forever. This is almost always wrong and the streets and squares of cities across the world are littered with bronze and granite monuments to people who were responsible for heinous deeds. But now and again their moment comes and they prompt claims and counterclaims that force new and significant solutions for seemingly intractable problems. Rhodes was a megalomaniacal imperialist with an unshakable belief in his racial superiority. With some irony, his fall may prove to be his most enduring legacy.