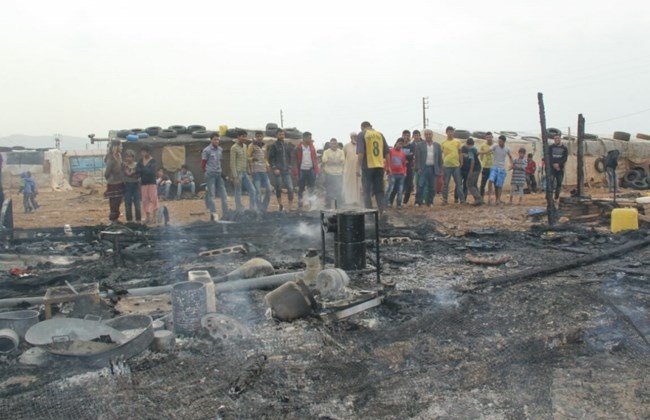 A few weeks ago, a runaway fire destroyed at least 160 tents in a Syrian refugee camp in the Bekkaa Valley, some 30 kilometres east of Beirut. The fire could have been caused by an electrical fault or by an accident while cooking. Because of the density of the camp, with some 300 tents housing 600 refugees in all, the fire spread rapidly. Three children and at least one adult were killed, bodies burned beyond recognition.

In the broad sweep of daily events, this is barely a pin-prick, a small tragedy in a conflict that has displaced more than half of Syria’s pre-war population. But hell is a local experience, erupting repeatedly in the Bekkaa Valley and in the other refugee camps scattered across Lebanon. These small intense tragedies earn the slightest of mentions in the media. But when they are aggregated the composite is a conflagration comparable to the worst of modern wars.

The invisibility, to those not there, of these four deaths in Lebanon’s winelands is a consequence of familiarity. These small, local hells are now so frequent that they are not reported. News of fires, violence, death and despair in the Middle East’s refugee camps is now so frequent that it’s ceased to be news.

John Berger put his finger on this contradiction in his 1972 essay, recently republished, “Photographs of Agony”. The constant flow of graphic war photographs from Vietnam were intended to show “moments of agony in order to extort the maximum concern”. But the reader, confronted with the war photograph across the front page, sees “such moments, whether photographed or not” as “discontinuous with all other moments. They exist by themselves”. As a consequence, “the issue of the war which has caused that moment is effectively depoliticized. The picture becomes evidence of the general human condition. It accuses nobody and everybody”.

One way of avoiding this conundrum of invisibility and generalization is to stay with the particularity of local experience, with the specificity of issues and concerns. This is what a large number of civil society organizations are doing, with regard to children, or women’s rights, or health or food security. This kind of work offers the opportunity of amelioration where national level politics and international strategies repeatedly fail. To reverse Berger’s insight, this kind of intervention is to re-politicize the war, to connect moments of catastrophic violence with the specifics of the human condition and to identify courses of action that will be effective.

Camps such as he unnamed cluster of tents that burned in the Bekkaa Valley on 1 June are particularly vulnerable because the Lebanese government has no coherent strategy for responding to the massive and continuing influx across its long border with Syria. Formal camps are prohibited and so groups of refugees are making do where they can, in almost 2000 similar camps. Arrivals are a new layer of despair, adding to earlier refugees from Iraq and Syria and about 450 000 long-term Palestinian refugees who have few rights and live in conditions that have been condemned repeatedly by aid agencies.

Before the current war in Syria erupted in 2012, Lebanon had a population of about 4 million. Since then, a further one million Syrians have crossed into Lebanon; now, about a quarter of Lebanon’s population are refugees. This is as if Britain was home to 16 million refugees, living in thousands of tented camps, wherever they could find a corner of land.

Here the spotlight – one of many points for re-politicization and re-connection – is on education, and with current or potential university students who are caught up in the violence. Until last year, this had been another area of invisibility. Now, we have the benefit of a significant study carried out for the Institute for International Education and the University of California Davis Human Rights Initiative. “The War Follows Them”, published last year, is an in-depth look at Syrian university students and scholars currently in Lebanon. It concludes with a set of specific recommendations that can serve as a map for universities, elsewhere, in engaging with this humanitarian crisis, given that they have the expertise and the ability to act, and the opportunity of finding innovative ways to resource effective solutions.

Neither the Lebanese government nor the United Nations has a statistical sub-category for refugees who are university-aged students. The Institute for International Education estimates that there are up to 70 000 displaced Syrians currently in Lebanon in this category. Many will come to be in what the UN calls “protracted refugee situations”, or PRS. PRS applies when a person has been exiled for five years or more and where there is little sign of the conflict in the home country abating. Across the world, the average PRS has been steadily rising; it is now close to twenty years.

There is an evident loss of opportunity for the individual. As elsewhere, student refugees in Lebanon face a cluster of impossible barriers that include no money for fees, the need to work long hours in underpaid and marginal work to survive, prohibitive regulations, discrimination and the fear of political violence and high levels of personal stress and distress. It will be quite impossible for Lebanon’s universities to absorb this many refugee students and other frontline states are in a similar position.

As with other experiences of life in a refugee camp, hell is an intensely personal affair. The strength of the IIE’s research is the way in which it builds its case from individual stories. Here is Mahmoud (not his real name). Mahmoud is a Palestinian refugee student who had been studying at Aleppo University in Syria until he and his family had been forced to cross the border into Lebanon. In May last year, the Lebanese government imposed new restrictions on Palestinians whose initial country of refuge had been Syria. Mahmoud cannot now either renew his permit in Lebanon or return to Syria. He now has no way of completing his degree – and no prospect of a legal existence.

Taken together, these thousands of individual situations have an aggregate effect that could prevent the rehabilitation of Syria as a country for more than a lifetime. Syria’s economic losses due to the current war have been estimated at more than $144 billion: the collapse of Syria’s economy and health and education sectors mean that it is now considered a “low human development state”. As the IIE report puts it: “the failure to connect young Syrians in the refugee population with higher educational and training opportunities now will only worsen that decline. It will also prevent them from entering fields of study that are critical to helping Syria recover in the future”.

Ideally, displaced Syrian students should be able to continue their education outside of their home country and then return post-conflict to help rebuild Syrian infrastructure and society. But if this opportunity is deferred for the many years of an extended PRS, bridging the chasm that currently separates students from opportunity is important. As the IIE’s team notes, providing these students with higher education will enable them to be productive members of their community within their county of refuge, and mitigate the risk they will turn to extremism or crime.

The Institute for International Education’s key recommendations are that the wider world of higher education must re-connect with these local and regional problems: “a range of higher education programs and solutions should be developed that can account for the diverse contexts within which displaced Syrians are living. In practice, United Nations bodies, governments, donor agencies, NGOs, and universities should work with the front-line hosting states to develop a holistic and coordinated response that offers targeted solutions to meet students’ diverse needs”.

To reconnect in this way is to map a path from general policy, to specific engagement, and to ameliorating the terrible circumstances of individual students. It is to learn from Berger’s insight when he was thinking about the Vietnam war a lifetime ago, to avoid the invisibility that sweeps in like a sea fog when personal hells are so common that they are no longer news.

Institute for International Education 2014. “The War Follows Them. Syrian University Students and Scholars in Lebanon”. Available at http://www.iie.org/Research-and-Publications/Publications-and-Reports/IIE-Bookstore/The-War-Follows-Them-Syrian-University-Students-And-Scholars-In-Lebanon